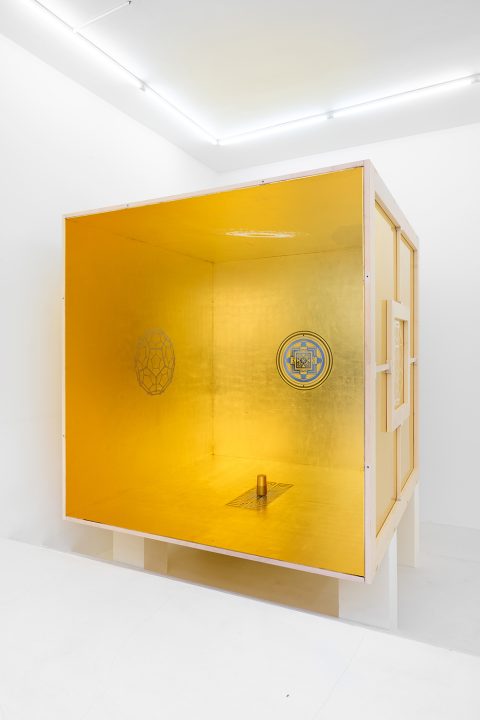 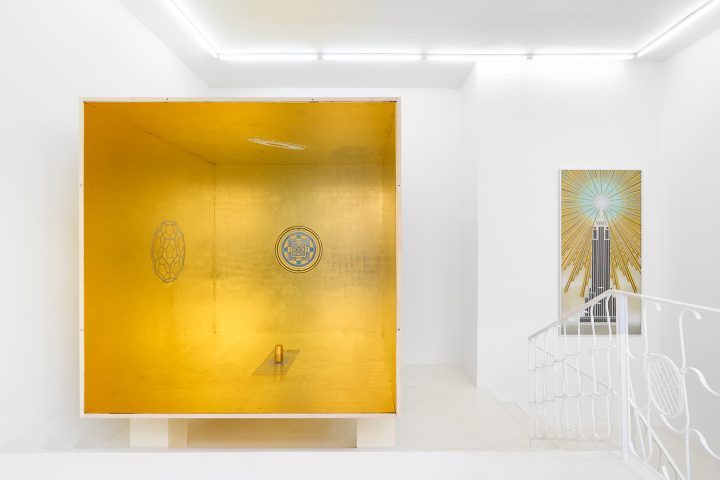 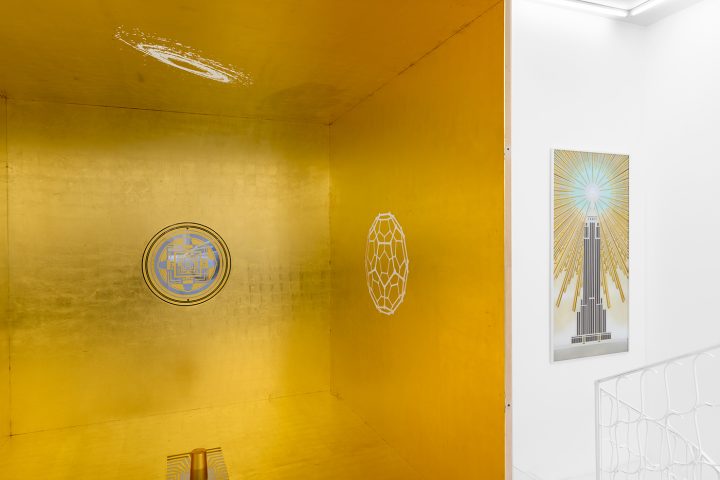 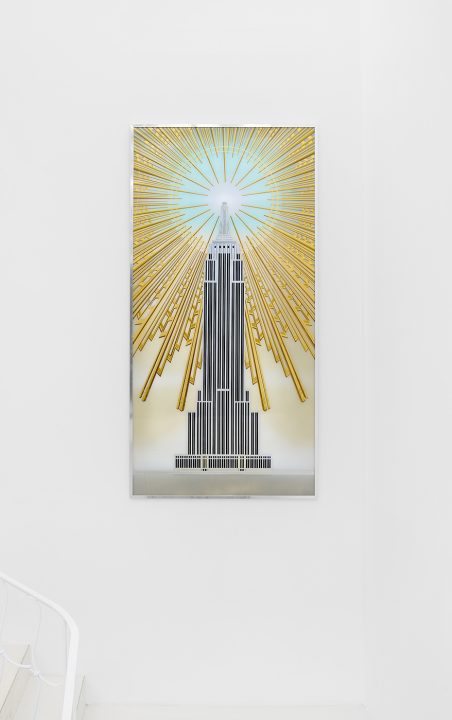 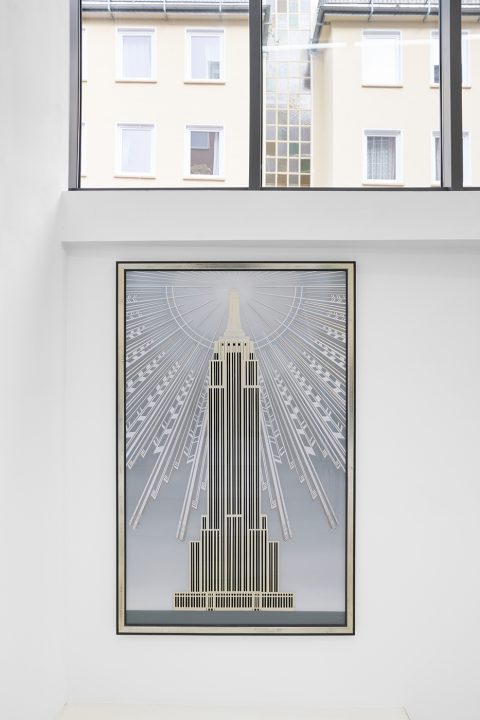 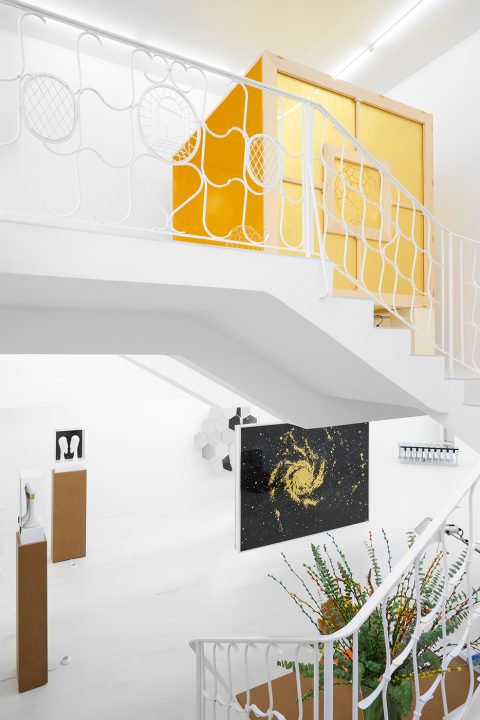 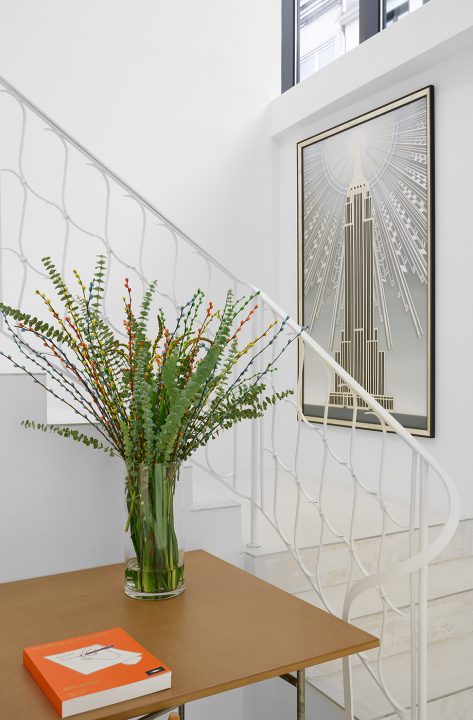 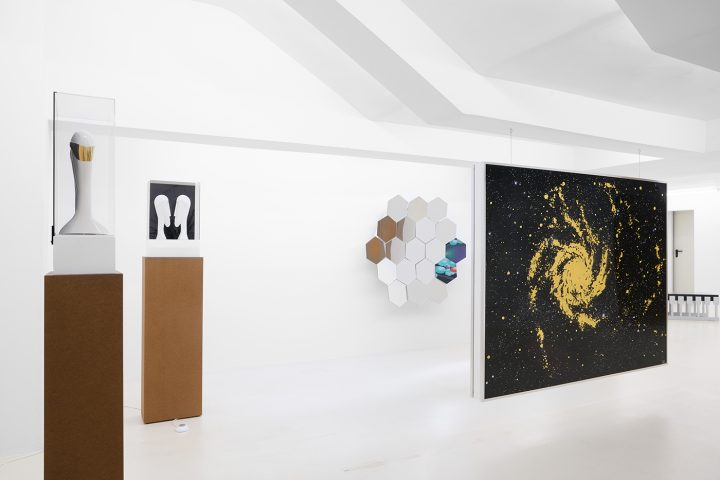 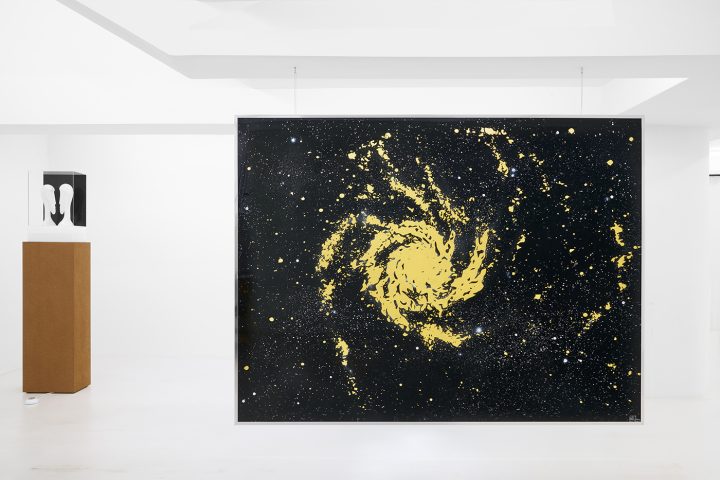 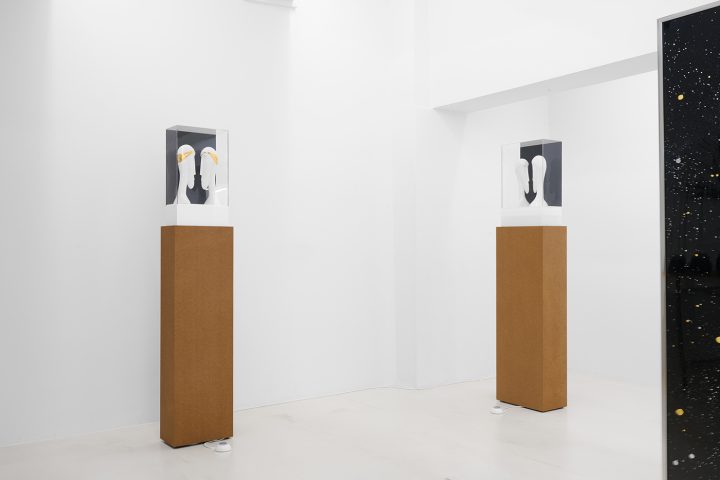 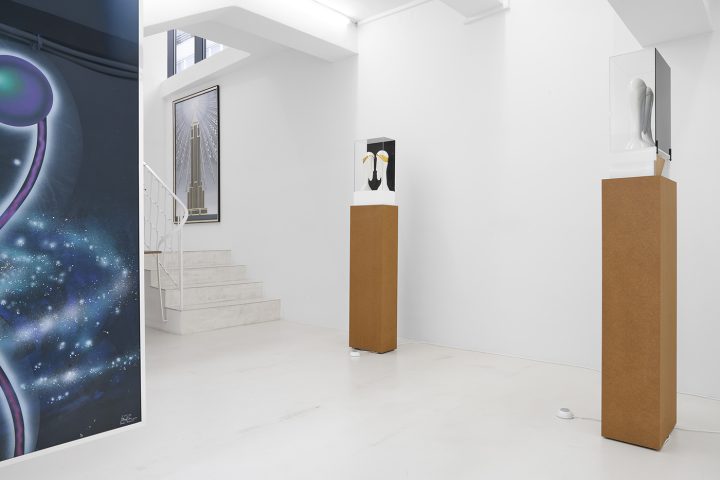 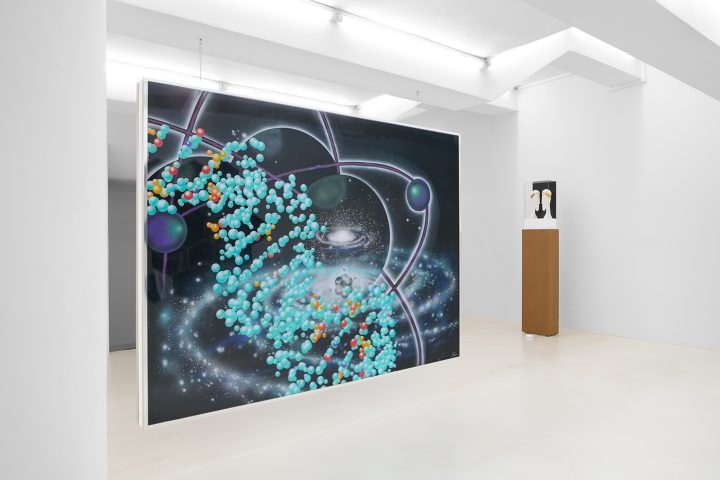 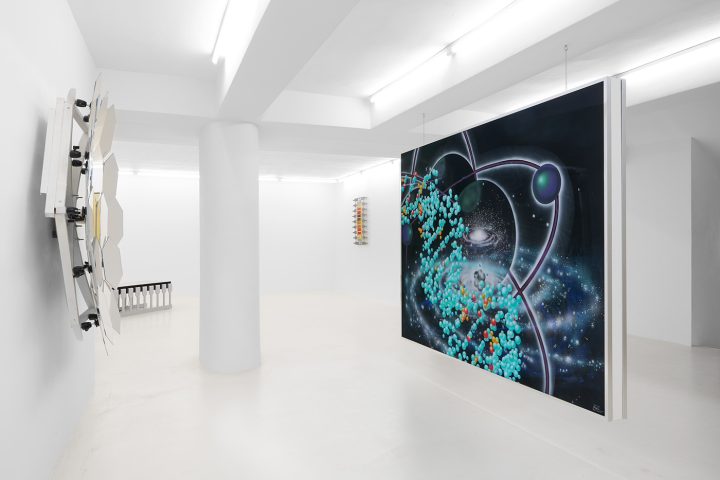 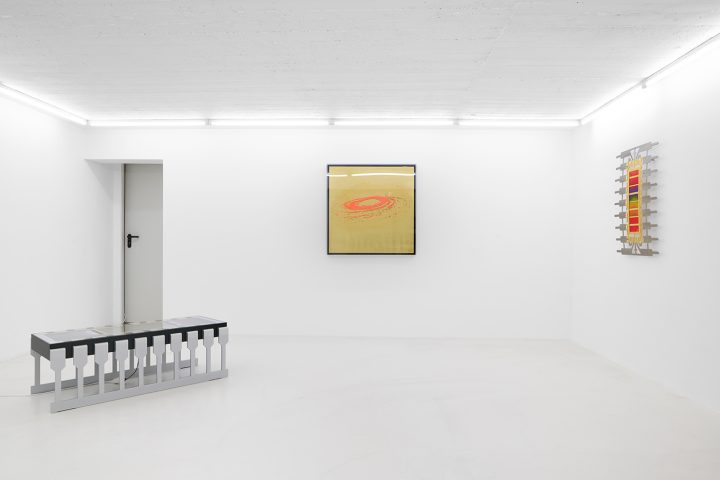 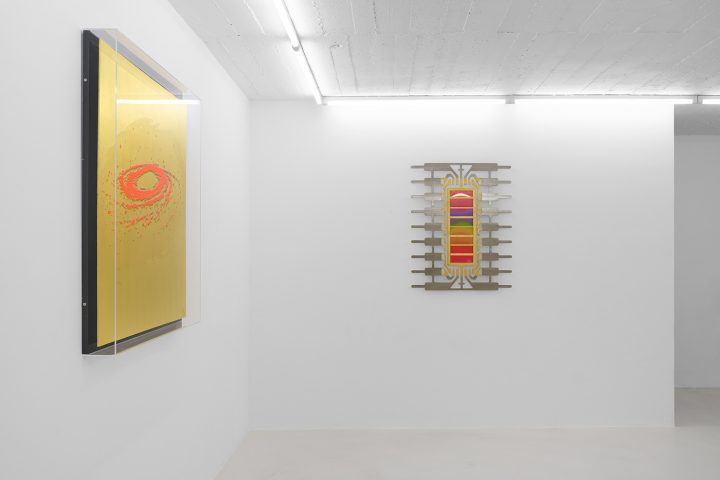 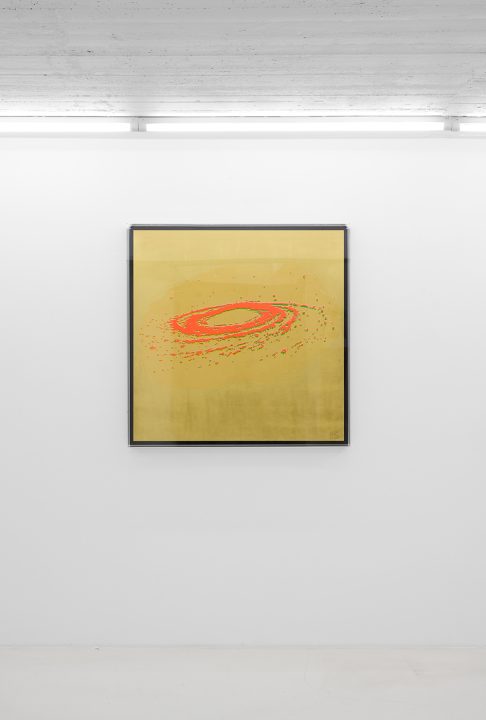 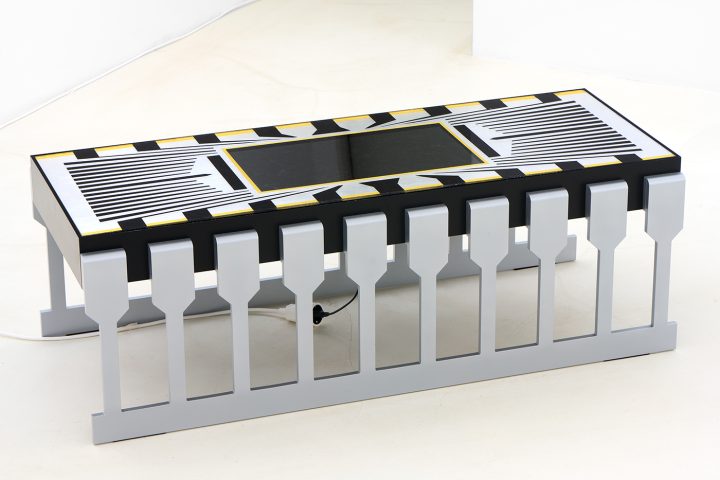 Feel fantastic and feel extraterrestic! The optimistic title itself opens up numerous worlds of Emil Schult: Those of the future, of technology, of outer space. The thread running through the reverse paintings on glass, the sculptures and videos is gold, the cosmic metal that is indestructible, does not carry germs and symbolizes timelessness.

The Golden Room is lined with 24K gold, with its iconographically portrayed technology (a microchip structure, the abstract shape of a carbon molecule), the galaxy, the Tibetan mandala form enabling knowledge and concentration, and the song and video I Am Digitized – I Won’t Die by Transhuman Art Critics:

The music emanates from a small, golden speaker in the golden room and describes in poetic form humanity’s longing and striving for an unlimited life, from the very beginning of the history of civilization until the highly technological present time.

The desire for eternal life paired with computer performance came up as an idea about half a century ago, when it became apparent that the storage capacity of microchips could reach a staggering extent and it would become possible to digitize, store and retrieve vast quantities of data.

In the video, a spiral makes its way through space. The spiral, a kind of archetype and primal energy, penetrating us and the universe, movement, growth, evolution, update.

The galaxy, basically symbolizing the next larger dimension of humankind in space, and at the same time the logo of Transhuman Art Critics, the musical project with Emil Schult. I Am Digitized – I Won’t Die in a 9 minute version also forms the core of the edition for JUBG.

Thus, rightward from the golden cube you see a half-sculpture made of stainless steel titled Struktur und Schatten (Structure and Shadow), a seemingly crude work referring to the first megachip, an identically constructed version on view on the gallery’s basement floor as a half-sculpture with plexiglass inlay and a video installation. Megachip: 1 million transistors on an area measuring one square centimeter. This megachip is also pictured on the invitation card and the fine structure of the many transistors refracts the light iridescently… feel fantastic, extraterrestic..
The newest chips of the last generation hold 13 000 000 000 (13 billion) elements on one square centimeter. I am digitized, organized, analyzed, visualized, memorized, I am digitized, I will not die… it sounds from the golden cube.

A promising future… we are entering the basement floor of the gallery… already from the flight of stairs we can see a very large golden galaxy on deep black ground – the 24k Golden Galaxy, embedded in diamond dust and little stars, and this is only the reverse side of the actual experience:
Behind it is the quarter scale model of the James Webb telescope, a scientific instrument designed and built by a cooperation of the most proficient scientists and engineers worldwide. It is a reflector telescope instrument and regarded as the successor of the Mount Palomar and Hubble Space telescopes, and is said to be excelling them by the hundredfold of images and scientific analyses on the history of our universe. A brilliant step in the right direction, towards a future that will hopefully inspire more sympathy and humility for the quite imbalanced present time.

This work enables the viewer to walk between the model of the Webb Telescope and a grand cosmic reverse glass painting UNIMOS, watching as the reflection of the painting in the mirror magically transforms it into a three-dimensional image.

Within the electronical sculpture Telepathie, a spark leaping over two heads visualizes the universal, ubiquitous, ethereal network connecting us all – a network whose crude image is for example the internet, ambivalent between good benefit and misuse out of monitoring, commercialism, and the creation of addictions.

The fundamental of this is amongst others the chip structure, whose architecture is based on archaic building structures such as the square, the rectangle, stacking – round, triangular, polygonal chips have never been developed. The most simplistic building structure permeates our modern culture, with little to no chip free spaces. Emil Schult is therefore looking for comparative imagery and realizes them via the materiality of reverse glass painting.

The archetypal presentation of the chip structure is accomplished by me by adhering precious metals (gold silver aluminium copper) behind the glass panel.

Quite similarly, modern steel and glass architecture can be made past photography. I have included the Empire State Building iconically in the exhibition and it takes little imagination to interpret the slightly modified structure as a conducting path. What is interesting here is the golden halo around the Empire State Building’s antenna. It is energetically targeted and luminous … light-energized photon-sailors… in utter contrast to the rigid building. Would this be the opportunity for a futuristic variant of an electronic component?

Feel fantastic – extraterrestic is directed towards an affirmative future, also regarding a living environment outside of planet earth.