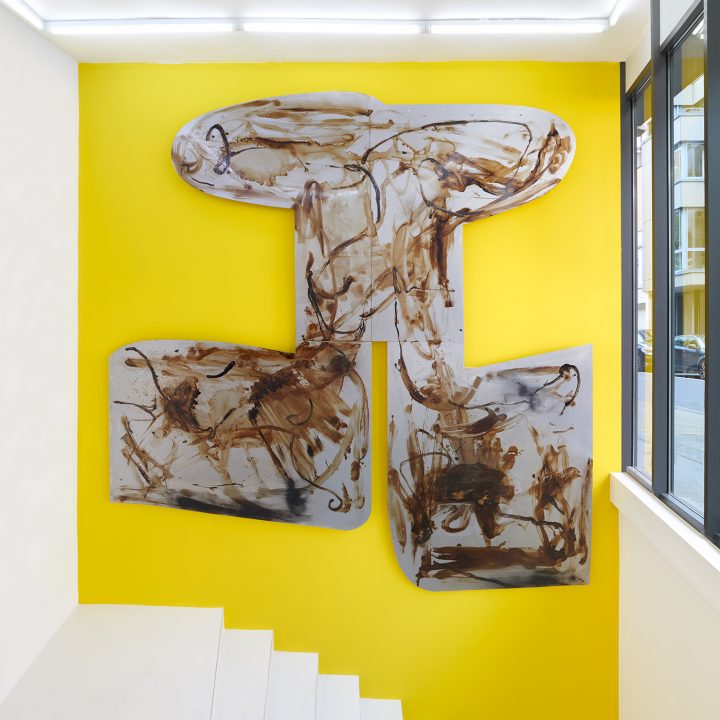 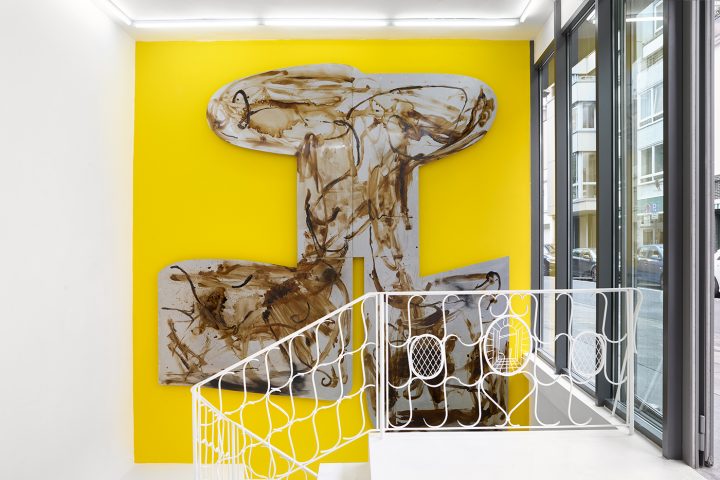 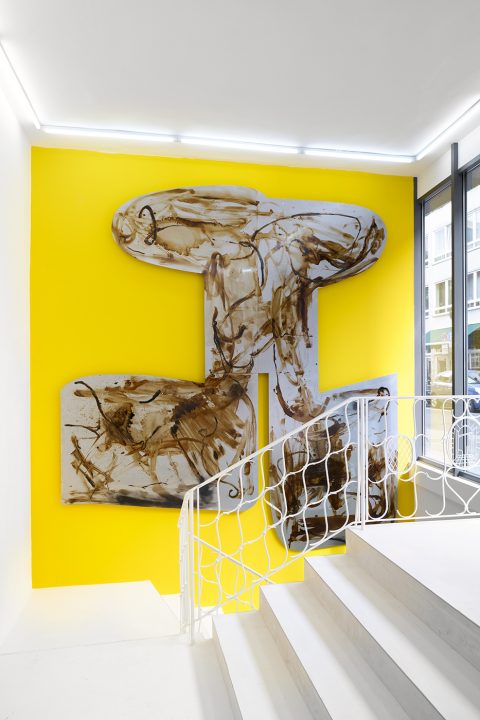 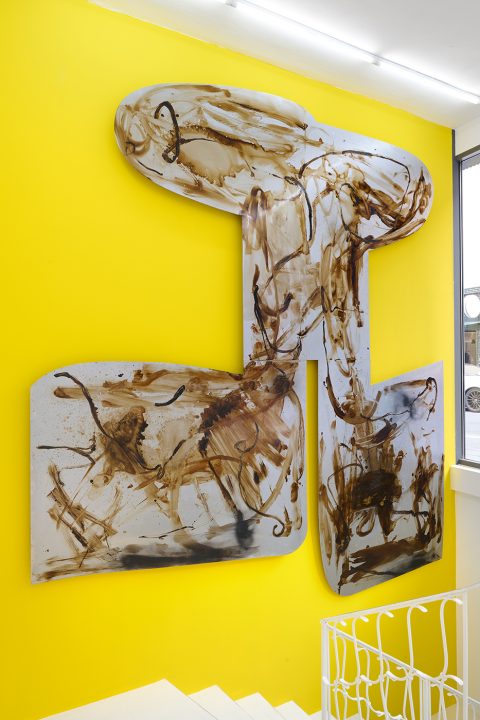 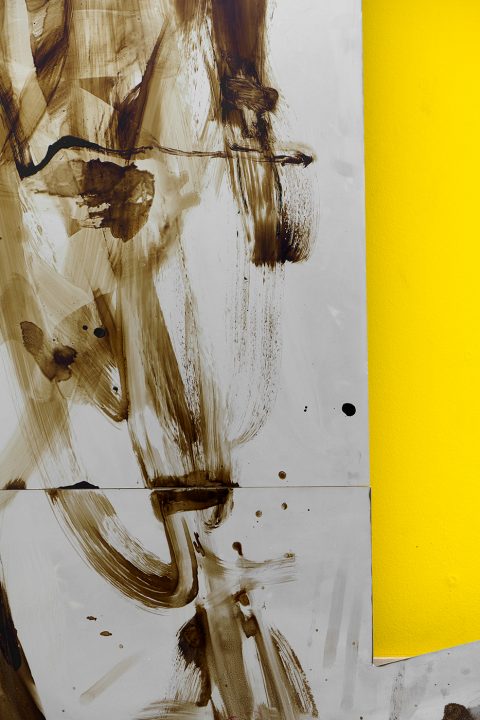 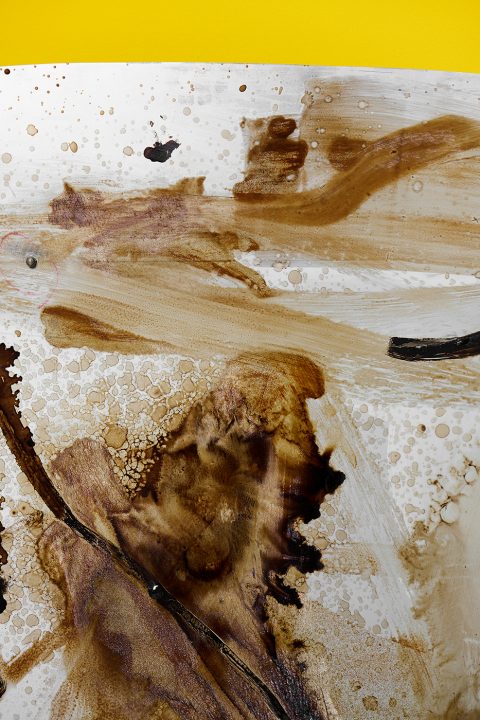 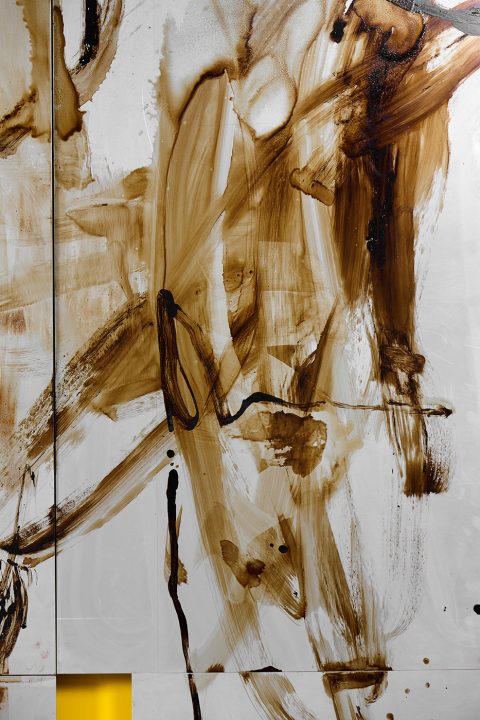 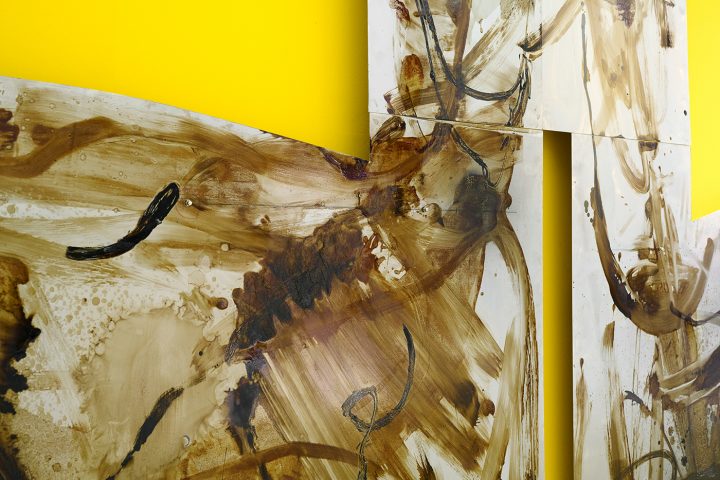 CM
When Norbert Möslang and Albert Oehlen present their sound installation
»ÖMEGA MAN II« at JUBG on September 3, 2021, it will be the result of a
long-standing working relationship. Both share certain aesthetic problems.
Both do things that one actually ›does not do‹ – composing music with
instruments that in fact are no instruments, painting with materials that
usually ›should be avoided‹ in painting. This is what connects the two in
their approach. In particular, the integration of avant-garde musical
techniques such as cut-up or sampling has pervaded Oehlen’s work for
decades.

NM
After I met Albert at a vernissage in St. Gallen in 2010, he sent me his track
»Betty,« which I edited and subsequently titled »Betty_corr« – as in
correction. The two versions were released in 2016 on the Belgian label
Meeuw Muzak as the A and B sides of a 7” single.

AOe
Norbert appropriated »Betty,« so to speak. And for the exhibition
«Blech_Betty« in the St. Gertrud Kirche in Cologne 2018, he then
disassembled this remix into its individual parts. And I, in turn, was
interested in what would happen if Norbert sent his music through a series
of my tree paintings, which I had painted on resonance plates: we then
repeated this again in the same year as an installation at the Willisau Town
Hall.

NM
By switching on the machines, making the metal sheets drone and vibrate,
one after the other, I produced an uncontrollable, unplannable sequence of
sound impulses – a composition deliberately subject to chance. Just as the
sounds in a forest may also seem random.

CM
The exhibitions as a »sea of frequencies« that is confronting the spectator,
to quote Andreas Ammer and FM Einheit. This is familiar in the field of
Neue Musik – a flat, planar sound field from which Albert’s trees protruded
vertically, while the music radiated out horizontally. Depending on how one
was navigating through that sound, one shifted between the differently
oscillating, sonorous centers of gravity.

AOe
In Cologne and in Willisau we had placed the metal sheets on stands in a
semicircle or like in a forest, to create a beautiful spatial sound. A year
later, Norbert had the idea that we could also do a single larger
sound/image, and I just nodded my head because I saw it the same way. We
just needed an opportunity to show it and that opportunity came now with
the newly opened JUBG in Cologne.

CM
JUBG is one of the first galleries dedicated to the threshold between art and
music. The gallery is not a commercial space, though, as it is primarily a
place of conversation and inspiration – to look at the intersections between
music and visual art, how both disciplines reach into each other, mutually
drawing things out or revealing them already present in their overlap. JUBG
is an experimental space. It is about enabling encounters and experiencing
aesthetic problems together.

NM
At JUBG, we now only see a pure form – four wall-mounted, untreated steel
sheets in the shape of the »Ömega Man«, on which Albert has painted in a
relatively rough and brutal way.

CM
And he painted in brown. His brown is almost an achromatic color, rather
crudely painted on or seemingly smeared about. The pictorial element of
the previous exhibitions recedes into the background in favor of a sparse
abstraction. There is the cool, offensive coldness of the steel and, in
contrast, the warmer brown. The object-like quality clearly expresses the
opposition of those elements.

AOe
I painted the sheets with a glazing brown tone, because depending on how
thick I apply it, the color becomes darker or lighter, more opaque or more
permeable. It goes from drawing to painting and back to drawing again.
Where the paint application is thick, it becomes almost black, and where it
is glazed, it becomes paint again, so different varieties of brown are
present, taking on all sorts of manifestations of a thick, oily substance.
I can do a wide range of color appearances with this brown on sheet metal.

CM
The »Ömega«-form appears as a silhouette of a figure. Albert had first
shown such paintings at Reena Spaulings in Los Angeles in May 2021. It is,
of course, a reference to the 1971 dystopian science fiction film »Omega
Man« starring Charlton Heston. Is Albert’s »Ömega«-form a »cipher of the
end times«?

AOe
»Ömega Man« is an atomic mushroom-like figure, a head-legged creature.
»Man« here, however, is to be understood rather gender-neutrally, because
the »Ömega Man« suggests both sexes. In any case, the figure of the
»Ömega Man« has something demonic about it. To make it sound, was the
aim of this exhibition.

CM
Together with the radiating sonor waves, »Ömega Man« becomes a cryptic
sign. »The sound of the doom is a roar.« However, the sign itself is a
positively cut-out form – after all, it is not a surface with holes negatively
cut into it like in Fontana but a positive form carved out of sheet metal. In
formal terms, Albert confronts any impending doom with a fully positive
stance.